Not Magnum P.I., but this is an agency of the photography type. I have been working on their prints at Griffin Editions. Recently I did a 40" x 60" for Larry Towell who is a high-up in the agency's structure.

The word magnum comes from magnus in latin meaning "great". The larger size in wine bottling and the ammuntion caliber is named for that reason as well. They are really great in BW photojournalism. The Agency began after WWII by 4 photographers committed to using the medium to elevate conciousness. Robert Capa, Henri Cartier-Bresson, George Rodger and David "Chim" Seymour.

Another photographer I have had the pleasure of working with recently was Chien Chi Chang. His series of Chinatown, NYC will be displayed at a large show in Singapore this fall. I produced 15 images in the 30 x 40 size for his show. I felt as though I learned how to make his prints sing after the experience. Making a print sing is something achieved after many hours of testing and burning and dodging a print to visual harmony. In years past I've also made 50x70 inch prints from his Chain series. They are haunting.

One other great that is represented by Magnum and I have done printing for is war photographer is James Nachtwey. His stuff is sick and his pictures can disturb, but they are amazing accounts of what is real.

I would like to be a Magnum photographer, but it's questionable whether I have the guts.
Posted by Virgil Stephens at 9:41 AM No comments:

In the second weekend of August 2008 I was in my hometown of Annapolis, MD for a wedding of a former AHS classmate. I photographed the wedding of Jen and Jarrett on Friday 8-8-08, then had 3 extra days to visit family, see friends, and exploit the benefits of being mobile in a smaller city.

Friday: Their wedding turned out beautiful and ideal. Jen and Jarrett tied the knot at the Unitarian Universalist Church in Annapolis, then had a reception on the Chesapeake Bay in Shady Side, MD. It was gorgeous, formal yet relaxed, and had a BBQ buffet that appealed to me greatly. I mentioned the bride was an old friend of mine and I felt very at ease around these Marylanders and visiting guests. I shot a ton of photos with both my brand new 17-55 2.8 DX Nikkor lens, and the D300 I rented that morning from Service Photo in Baltimore. The results are fantastic, and I'm excited to deliver them to the couple. 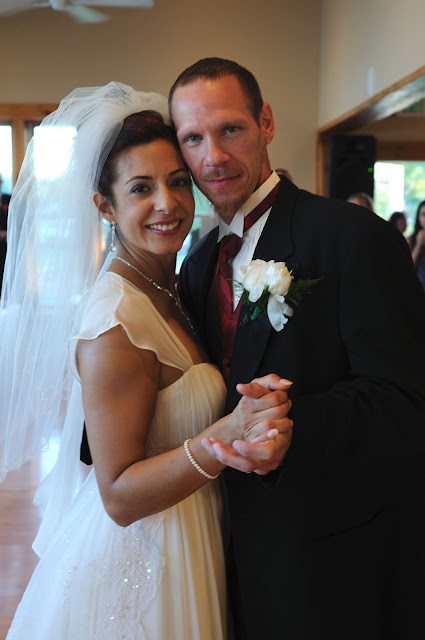 By 11 pm I was almost out of memory cards, my feet were aching, and the party was ending. I said good bye's, packed up and drove the 20 minutes to my folks place where my wife was waiting in West Annapolis. Fortunately for me the Olympics Opening Ceremony was just wrapping up and I got see the finale of the torch lighting. I was cringing when that man was hoisted up the hundred some feet in the air, and did his running pantomime while a few times it looked as if the cables slipped. When it came together though, it was amazing.

Saturday: I slept in a little, then got visit with my only nephew Ian when I awoke. He is 8 1/2, into everything fun, and was on his way to spend a week at a summer camp on the northern Chesapeake. He was excited and I got a kick out of hearing that he would take a photography class there.

With more to get done Mal and I left for a bit, got the car washed, then I went to Macy's at the Annapolis Mall and bought a suit on sale. When we got back my brother in law Lawrence's relatives the Chu family from London were at the house sharing Pizza and playing in the yard with the dogs. Lydia is Lawrence's sister and she was accompanied by her three amazingly great kids Joe 16, Tessa 12, and Sam 8. We all walked down the street to Weems Creek and checked out the water, canoe, and fish. 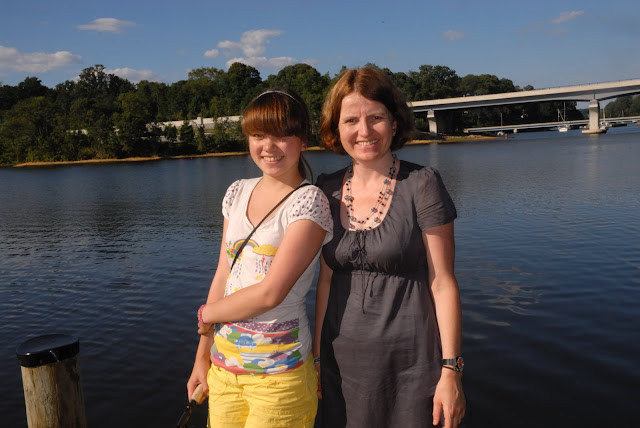 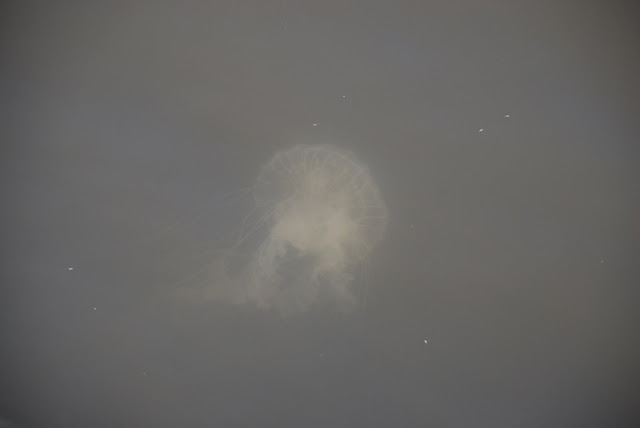 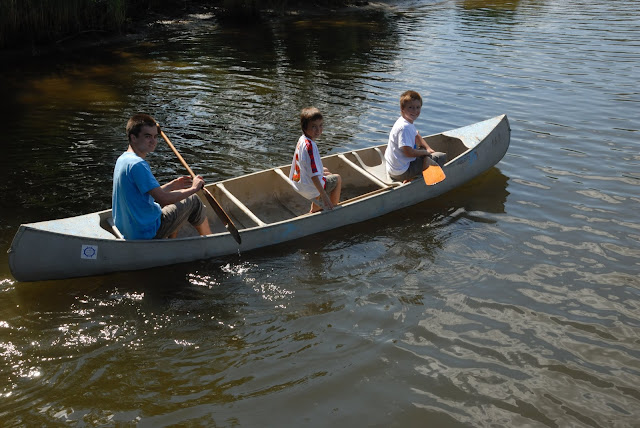 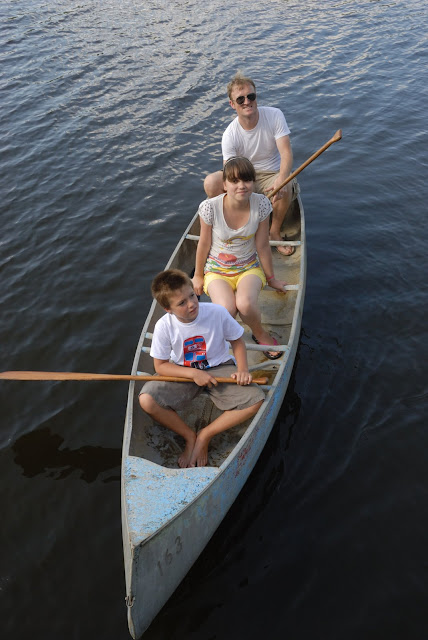 That night Malissia and I went to eat at Park Place's Carpaccio for dinner. The food was very good. Afterward we met my old friends Chris, Brian, Jim, Stacia, Sean and Kate in Annapolis Roads for some late night reveree. i can't believe nobody complained about us..


Sunday: I start with errands. I go alone because Malissia is a little hung over from all that chardoney. I needed surf wax which is hard to locate in NYC, so I first hit up East of Maui. Next I need a gift for Danniela's birthday (August 11 th) and hit the Game Stop and am told by the sales-kid that Mario and Sonic at the Beijing Olympics is a fun time and I believe him. Cha-Ching!

Visiting and staying in contact with friends is always very important to me. Brian Roszell was an Annapolis guy I became friends with when we both lived in Brooklyn a few years (centuries) ago. Now he and wife Lindsay live back in Annapolis and have a 4 month old daughter named Kate. I stopped by to meet her, catch up as much as I could for an hour, drink another coffee, and get Brian to promise to hit me up on ichat, Skype, or make our Macs friends like we used to be. That afternoon allowed for lunch plans with Nik and Camille -the coolest couple in Annapolis, Maryland (1996-). We got our grub on at CPK (once again) Westfield Mall and had a nice talk about music, philosophy, art, and real estate driven economics. They own a house in York that's been on the market for over a year and are a little bummed about that.. On the very positive side Nik's band Burn The Fields has just released an EP, shot a video and has been signed by Snoop Dogg's label. -damn!

Well that hit the spot. Mal and I had a concert at Pimlico to go to this night. It was the Virgin Mobile Music Festival at Pimlico Race Course outside Baltimore. It was the third year it's happened, but the first time for both of us. On the way I made a pit-stop at Quarter Field Roads new Wal-Mart super store because I had shot my resource's worth of CF Memory. I was happy they were open at 6pm on a Sunday, and the clerk said that they'd opened in March '08 and had not locked the doors yet.

With great thanks to my girl Rosemary at CMJ we got in to the festival free as vip's and got badges to do photography. I am loving life! Bob Dylan goes on as planned at 6:45 and I get nice golden-hour photos of this living legend. Kanye West came on last to close out the weekend, and I reservedly bobbed my head and waved my arms cause the music is infectuous and the light show wicked!

Most folks would be headed for home this Sunday evening. As for my wife and I, we had made our arrangements to have Monday off, so we were just getting started and our friends Angela and Aaron were holding it down in Baltimore till we could get there. The Brewer's Art is my favorite gastro-pub like restaurant w/ a dungeon bar that has strong beer in my old neighborhood Mount Vernon. Go there. A little tired, slightly wobbly, we payed our tab around 1(?) then made way for the Annapolis rest. Almost there, the Double TT Diner could not be resisted, and it's really best we went in to have food in our stomachs, because we laid down that night and would have another day tomorrow, and that would also be eventful and expansive. I just finished one of the longest days in my life.